This afternoon our children watched you take your Oath of Office, and later, after some bike riding outside, came in to see you walk a few blocks down Pennsylvania Avenue in the Inaugural Parade.

They have seen you do this before, in 2009, at ages 4 and 1, but they remember that a bit vaguely. (They knew who you were then, as I, their mother, would regularly take them to the local campaign office to collect call sheets during the fall campaign for your election in 2008.) This time was different: our daughter voted for you in her second-grade class mock election; our son lists God, his father, his grandfathers and you as his favorite “boys.”

They are young, and engaged. They care. They will remember seeing you wave at the crowds, they will remember you taking your oath, hugging your wife and children, and even, though past their bedtime, you dancing with the First Lady. They will be good citizens.

Thank you for making it so much easier for that to be a fact and not a hope.

Please accept these drawings they made for you—utterly unprompted by anything but seeing you in today’s Inaugural Parade. If there is any way your office could send any sort of response to them, it would be tremendously appreciated. (When I was six I received a response from President Carter… it remains cherished.) We wish you all the best in your second term. We will do our best, too. 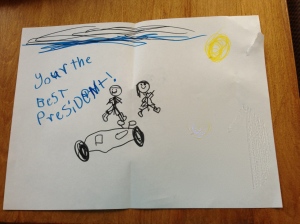