About 8 years ago, a classmate of my nephew’s told him that John Kerry–who my nephew may have expressed a preference for over President Bush–was a “baby killer,” and that he shouldn’t like him. My nephew and the classmate? They were 8 years old.

Our daughter is nearly 8 now. I just received an Obama-Biden bumper sticker in the mail, and because of what happened to my nephew, because of the fact that many students and parents know who I am at the school thanks to my involvement with the PTA, I will not put that sticker on my car. (Instead, I have a silver button that I’ve put on my ubiquitous handbag. You have to get kind of close to read it: “Greater Together. Obama 2012.” So close that if one had a negative thought about it, I’d be able see it on one’s face.)

Our children know who the President is. I’ve taken them to his local campaign offices in 2008 and this year. They’ve listened to him speak, they’ve seen pictures of him meet their three Wisconsin cousins. They think he’s a nice person. The idea that another child might yell at them if they expressed that out loud–it pains me. It pains me as much as it pained me when I was six, when a boy on the playground told me I was going to hell for not going to his church.

Which brings me to this: consider the First Lady’s posting of this picture: 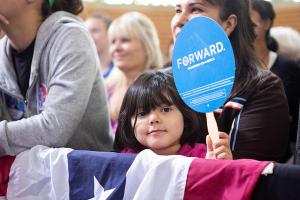 A woman I know responded to the First Lady with this: “This makes me sad. Most valuable lesson in life is to teach children to think for themselves, not for us to force our beliefs.”

I’m not sure what element of the picture evokes sadness or force, but given that I have pictures of my children at campaign offices and that my brother and his wife have posted pictures of their children meeting the President at campaign events, I think it’s safe to conclude that our actions would also make her sad. That she might consider the way we raise our children to be lacking in some capacity.

That pains me a little.

Our children do think for themselves. But we’ve taught them always to think of others first. The “others” they think of? Mom and Dad. Each other. Their family. Their friends. Seems pretty standard. Teaching your child what you believe, encouraging them to practice what you practice (and preach) politically, religiously, or culturally–I’ll accept that from any parent.

The most important lesson we can give our children? Treat others kindly, by accepting that others might view the world differently and make different choices than you, and by knowing that the power you have lies in your doing, not in your believing.

What do you think? Cancel reply