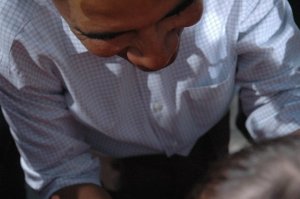 Sometimes I need to read things that make me happy: Obama, Clinton Scored Back to Back Home Runs With Their Speeches (Robert Shrum for The Daily Beast).

…Obama could turn to the future—not with grandiose promises, but with credibility and humility.

Two days ago, as we watched the President take the stage in Charlotte, after hearing the Vice President describe the President in action, up close, my husband said, “And I think I have stress. How does he do it?”

My husband has an intimate understanding, on a corporate and not global level mind you, of near insurmountable problems, some of which he inherited, some of which happened under his watch, some of which are just dumb luck. Last night over dinner, after he described an issue at work (I say issue, but his word might likely have been “catastrophe”), I quoted the President, “We can solve these problems.”

Problems, huge, unforeseen problems — they cause an immeasurable amount of stress. But maybe the trick is to learn to expect them. Maybe it’s the shock, the “I can’t believe how fubar this is,” maybe that shock–and often subsequent anger–drive the stress. What did our President say the night he was elected just under four years ago?

The road ahead will be long. Our climb will be steep. We may not get there in one year or even one term, but America – I have never been more hopeful than I am tonight that we will get there. I promise you – we as a people will get there.

There will be setbacks and false starts. There are many who won’t agree with every decision or policy I make as President, and we know that government can’t solve every problem. But I will always be honest with you about the challenges we face.

He knew it was fubar. He knew the path forward. As the Vice President said:

This man has courage in his soul, compassion in his heart, and steel in his spine.

What do you think? Cancel reply

entries and then some